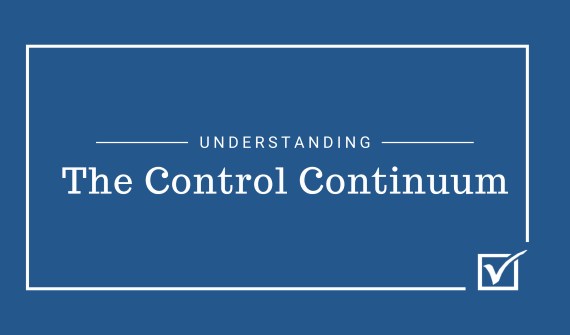 Greek mythology tells a story of the arrogant and deceitful Sisyphus, king of Ephyra, who tricked and trapped the god of the underworld. As a punishment, he was forced to push an immense boulder up a hill for eternity. Each time he nears the top, the stone rolls back to the bottom. One can assume he’s still at it today. We can also assume how he feels about it.

Most of us can relate to Sisyphus (minus his arrogance and deceitfulness, of course). We’ve all had times when our best efforts seemed to amount to nearly nothing—like no amount of work could affect the outcome. Why is that? Chances are, we’re working on the wrong end of the Control Continuum.

The Control Continuum—this graphic may help you visualize what we’re talking about. It’s a simple visual, but the concept behind it just might change the way you plan forever. 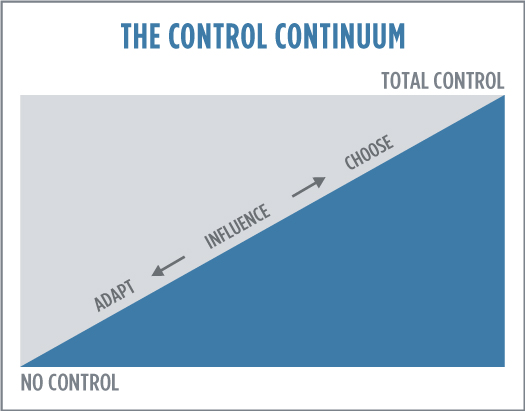 To better understand the importance of control, we need to clarify time. We measure time in minutes and seconds, but we measure our lives by events—first steps, first words, first foods, birthdays, holidays, achievements, defeats, the struggles and the rewards. In terms that truly matter to us, the basic element of time is an event—so the key to managing time is controlling events. If you fail to control events in your life, then events in your life will control you. That’s no fun.

That’s why we need to understand control.

We aren’t saying that you can take control over every event in your life to the point that no event will ever control you. There are things we can control and things we can’t—and all of us confuse them now and again. When we mistake something we can’t control for a thing that is within our control, we find ourselves feeling frustrated, exhausted, and even useless rather quickly. We ask, “Why can’t I make a difference here?” Sometimes the answer is simply, “Because you can’t. This is outside your realm of influence.”

Everything in your life exists on a control continuum, or spectrum, where you have varying degrees of influence ranging from no control to total control. When you are in a situation where your influence is high, you have the power to choose, act on those choices, and see results. When you have no control and no influence, you have no choice but to adapt. That can be a hard realization to face. Luckily, as humans, adaptation is one of our greatest assets for survival. But constant and continual adapting can wear you out.

So, if you’re feeling like Sisyphus, what do you change? Your focus—the secret is to worry less over things you can’t control, and focus, instead, on those things that you can influence. Planning allows you to look ahead and take control of situations before they arrive. Yet, as we’ve grown up in our homes and in society, we’ve all been conditioned to believe different things about what we can and can’t control.

First—There are events we can control, but we believe we can’t. Consider that for a second. If the reward is great enough, we will often find a way to make it happen. Imagine you received a phone call from a wealthy philanthropist who said he would give you $500,000.00 to use however you’d like. All you had to do was meet him at the airport Friday before 5:00 p.m.

Now imagine you start driving toward the airport with plenty of time to be there before 5:00, but on the way you get stuck in a traffic jam. The traffic reporter on the radio announces that a semi-truck jack-knifed in the road, and the traffic would be backed up for the next 3 hours. You’re stuck. You can see the airport towers from where you are, but you aren’t moving. Will you still be at the airport before 5:00? We’re guessing you’d find a way.

Things like this happen all the time. We’ve all heard of people in emergency situations who have done things they never imagined they could.

Second—There are events we cannot control, but we believe we can. These tend to involve other people or events with several variables. Imagine the parents who are not comfortable with their child’s choice of friends. Parents can’t dictate or control who the child likes or doesn’t like. They can try to influence their child’s decisions, but ultimately they are dealing with another individual who also has his or her own choices to make.

Think about the times in your life when you’ve felt like you’ve had little to no control. What were the circumstances? Were other people involved? Chances are, the situations were far more complex than you wanted to admit, with more variables at play than you had imagined. How much energy have you spent fighting things you couldn’t control?

For consideration, here’s a small sample of things you can’t control:

What other people think

What other people say

What other people do

How other people feel

Who is in your family

The reality of death

And that’s just the beginning. Yet, it’s so easy to get worked up over things we can’t control. We’ve all asked, “What will people think of me,” or “Why can’t I change his opinion?” Have we not? But beating our heads against the wall won’t move the wall—we’re just pushing another boulder up the hill.

What if we established selective control?

If we’re continually focused on the things we can’t control, we’ll lose our self-esteem and our motivation. That’s a recipe for underachievement. But we can recognize and harness the things we can control and work to minimize the impact of the rest. No amount of complaining has ever changed the weather, but we can plan for sun and keep an umbrella in our bag just in case.

If you control your morning routine perfectly and get out the door in time for your 8:30 meeting, but get stuck in traffic. Assess what you can and cannot control. Perhaps you’ll call ahead and reschedule your meeting, then use the time on the road to listen to an audio book. Adapting your mindset and influencing events where you can will leave you feeling accomplished and productive, instead of helpless and frustrated.

How can understanding the Control Continuum help you plan?

Imagine what would happen if you made plans based on the things you could control—mainly yourself? Your goals might look something like this:

Learn to control my temper

Everything on that list is doable and within your control—and that’s only the beginning. If you consider the control continuum as you set short- and long-term goals and plan your daily tasks, you’ll start seeing more growth. Your plans will be more specific, as you harness the things you can control, and work to minimize the effects of the things you can’t. When you focus on events that are high on your control continuum, you’ll find no shortage of achievable goals you can set for yourself.

Accomplishing things that matter to you works wonders for your self-worth. As you take control over events in your life early, you’ll come to value your time even more. Time becomes the tool you use to reach your goals, rather than something to fight against. So when those urgent “emergencies” pop up, you’ll easily distinguish between those that are important, and those that are nothing more than giant boulders at the bottom of the hill.

6 Replies to “Understanding the Control Continuum”