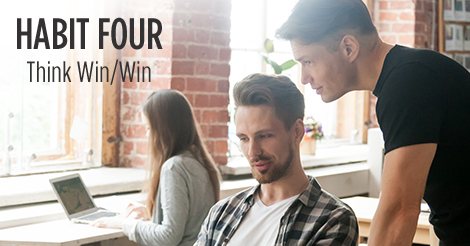 “If I focus on my own Win and don’t even consider your point of view, there’s no basis for any kind of productive relationship.” —Stephen R. Covey

We live in a competitive society. That competition has shaped us as groups and individuals. It has not only played an integral role in our survival as a species, but it has also largely defined our individual success—acceptance among our peers, achievement in the classroom, and even the way we perceive our climb through our business pursuits. It’s hard to wrap our minds around the concept of winning if there isn’t a losing party. To most people, the win/win paradigm sounds more like an imagined utopia than an achievable reality.

However, Habit Four: Think Win/Win is a powerful philosophy that can yield far more success in your business and interpersonal relations than mere competition ever will.

The daily competition that surrounds us has created losing paradigms that we often operate within when we interact with others. Although these paradigms are common, they aren’t productive. If we operate under any mindset other than a Win/Win mindset, nobody wins. In order to understand Win/Win, it helps to look briefly at these alternative paradigms.

When two stubborn, ego-invested individuals, determined to win at all costs interact with each other, the result will be Lose/Lose. This sort of interaction creates enemies and destroys relationships. Lose/Lose is the philosophy of conflict and war. Stephen Covey states that this mentality creates two vindictive parties who want to ‘get back’ or ‘get even,’ blind to the fact that murder is suicide, that revenge is a two-edged sword.

The Lose/Lose philosophy will lead a person to focus only on what will damage their enemy, even if it means they damage themselves in the process.

Some people are programmed another way. “I lose, you win.” A Lose/Win philosophy may feel like peacemaking, but it doesn’t really create peace. Lose/Win has no standards to fall back on, no demands, no expectations, and no vision. In negotiations, Lose/Win is seen as giving in. You suppress your feelings and become a doormat.

Win/Lose is the opposite of Lose/Win. It’s an authoritarian approach, “I get my way; you don’t get yours.” Most people have been deeply scripted in the Win/Lose mentality since birth. The family, the school system, sporting events, games, and even elements of the law promote a Win/Lose mentality. But life doesn’t have to be a zero sum game. For you to win, another person does not have to lose.

“Most of life is not a competition. We don’t have to live each day competing with our spouse, our children, our coworkers, our neighbors, and our friends. “Who’s winning in your marriage?” is a ridiculous question. If both people aren’t winning, both are losing.”     —Stephen R. Covey

People with a Win mentality don’t necessarily want anyone to lose—they simply want to get what they want. If there is no sense of contest or competition, it’s quite common to have a Win approach. You work to secure your own ends and leave it to others to secure theirs.

If you have a Win/Win mentality you work to create mutually beneficial solutions that leave both parties feeling good about the decision and committed to the plan of action. It begins by sharing what you both want to gain and finding a way to make it happen.

“Win/Win is based on the paradigm that there is plenty for everybody, that one person’s success is not achieved at the expense or exclusion of the success of others…Win/Win is a belief in the Third Alternative. It’s not your way or my way; it’s a better way.”    —Stephen R. Covey

A Win/Win negotiation happens when you have deep consideration and respect for the person you’re dealing with coupled with a high degree of courage to support your point of view. If you can respect others as well as yourself and treat people the way you’d like to be treated without compromising your own needs, you’ll win more than the negotiation—you’ll also win a friend.

Win/Win or No Deal

In many business transactions and even in some family interactions, you can begin a negation with the understanding that you will come up with an agreement that benefits both parties or no agreement at all. This allows both of you to work from a position of equal power. If you aren’t able to come to a mutually beneficial agreement, it’s better to walk away without any deal. This way neither party feels slighted by the other, and both parties feel respected. If you need to negotiate again, you can trust that you’ll both come out unscathed.

As you plan your daily appointments, track progress toward your goals, and determine your tasks, keep your commitments to yourself and others your top priority. List them on your Prioritized Daily Task List and label them appropriately. As you follow up and follow through with your promises, everyone who is counting on you will win, and you’ll win their trust. This makes it even easier to work with them later. You build up an emotional reserve, like a deposit in the bank that each of you can draw from later on.

Keep detailed notes in your planner of the commitments you have with others. Note the specific elements that mattered most to them during your negotiations, so you can be sure to prioritize those items as you complete your daily tasks.

Having a Win/Win mentality and doing all you can to help others feel respected will take you far in business and in life. Keep a reminder in your planner to think Win/Win, to help encourage you to always look for a third alternative when you deal with others—an alternative that allows everyone to feel appreciated.

In the words of the late Stephen R. Covey: “If we can’t make and keep commitments to ourselves as well as to others, our commitments become meaningless.” 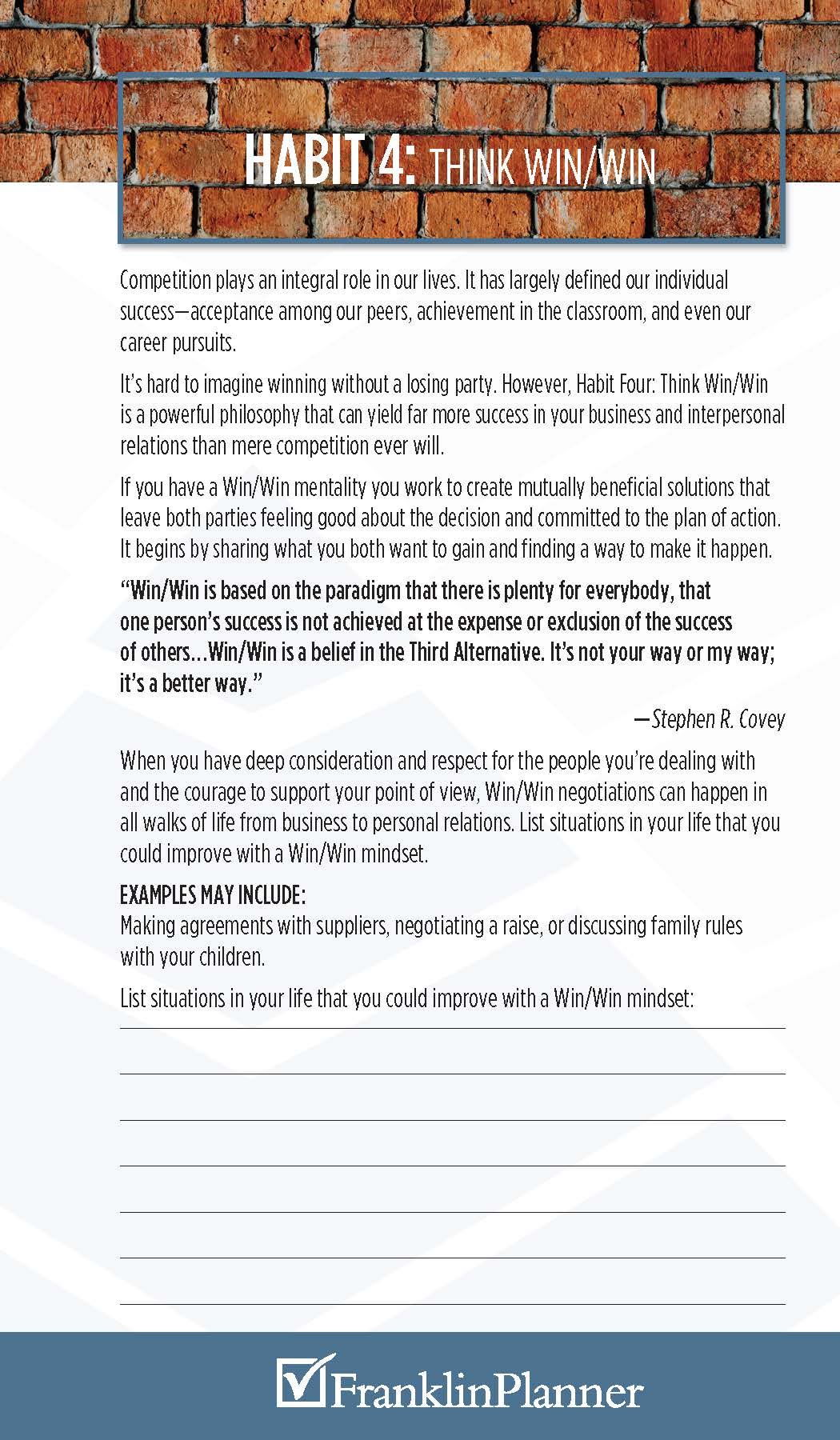 One Reply to “Habit 4: Think Win-Win”