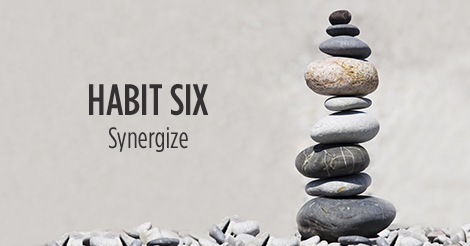 “Valuing the differences is the essence of synergy—the mental, the emotional, the psychological differences between people. And the key to valuing those differences is to realize that all people see the world, not as it is, but as they are.”   —Stephen R. Covey

Simply defined, Synergy means that the whole is greater than the sum of its parts. People often use sports teams as an analogy to explain this phenomenon. Each member of the team is essential in his or her defined role in order for the whole team to succeed. Yet, there are times when a team seemingly loaded with talent consistently underperforms its potential, and other times when teams with lesser talent win at an inexplicable rate. Why is this? One reason may be that some teams work together better than others.

How do you work together effectively? The key is to realize that the relationship between each part or team member is a separate element of the whole—an element that was created by each of the members. It was not there before. Relationships add strength to the end product making it greater than the sum of its original parts. One plus one equals three—me, you, and our relationship.

Habit 6: Synergize is the habit of creative cooperation or teamwork, synergy involves exercising both a win-win mentality and empathy. The trick is learning to benefit from differences rather than fighting against them.

“Synergy, where the whole is greater than the sum of its parts, results from valuing differences and bringing alternative perspectives together in the spirit of mutual respect.” —Stephen R. Covey

This is great in principle, but it requires discipline to put it into practice because people think differently. We value different things. We often disagree. So if we want to make a decision as a group or enter into a business agreement, it pays to be open to suggestions that differ from our own ideas.

How can you practice synergy in your daily life? It won’t be required in most of your daily interactions, and it may not work with everyone you meet, but you can find ways to create synergy.  Synergy is not something that just happens. It takes planning and effort.

Open your planner and list each of your goals. Consider the people in your life who may be able to help you with specific aspects of your goals. Next, list your current resources, skills, and talents and see if you have anything that you could offer to others. Then talk with the people on your list and listen closely to their spoken and unspoken desires and interests. Be willing to discuss your interests and desires and come up with alternatives that are mutually beneficial. You’ll be surprised at what you can help each other achieve.

If you have a goal, let’s say, to run a marathon, talk with people you know who train regularly and have already run a marathon. They will have great advice to help you in your efforts. What can you offer in return? Can you combine efforts to make it mutually beneficial?

“The call and need of a new era is for greatness. It’s for fulfillment, passionate execution and significant contribution.” – Stephen. R Covey

There are opportunities for synergy all around you. If you learn to take advantage of those opportunities, you’ll grow in ways you could never do on your own.